The Sauce of Many Dishes: Chile Colorado and Its Many Possibilities 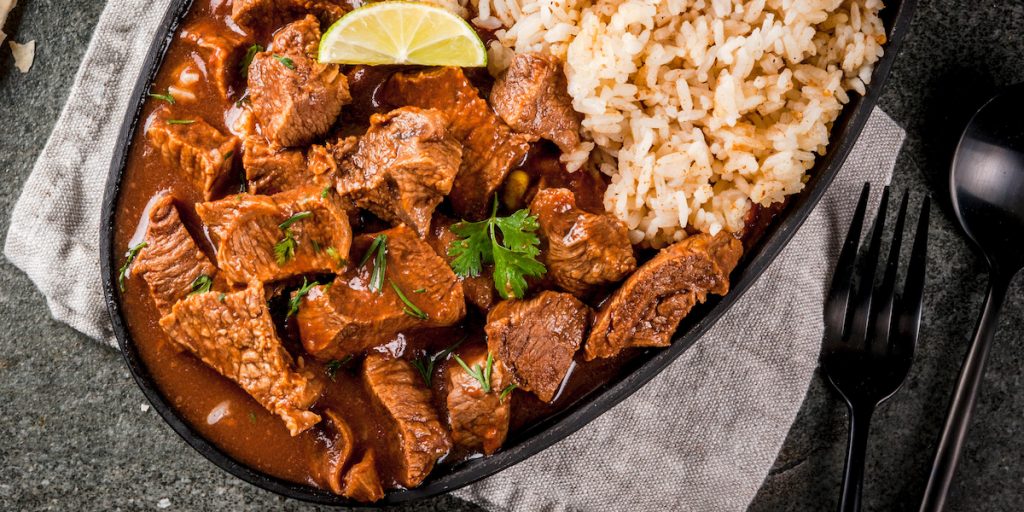 Like many traditional cuisines, Mexican food is a blend of various sources. For the most part, Mexican food has a mix of indigenous and Spanish influences. Like the people themselves, the characteristics of the food comes from its history, natural resources, popular crops, and a mixture of native and colonizing cultures. The three staples of the cuisine are largely thought to be chiles, beans, and corn. Mexican recipes have an amazing ability to take one ingredient and repurpose it in a variety of dishes to yield delicious results. That is the case with the first item on the list: chiles. Take chile colorado, for example. This one ingredient—prepared a certain way—can be used in a variety of ways. Let’s take a look at all the amazing dishes you can make with it.

The Many Chile Possibilities

While chile is a staple of the diet, this is not reduced to just one type. There are many different types of chiles common in Mexican food. Some of these include:

Chile Colorado refers to beef covered in red chile sauce. Colorado is the word for ‘red’ in Spanish.  This is a very popular and widely used dish in Mexico and even in the Southern United States, where Mexican restaurants serve regularly. It is most often thought of as a kind of stew since the beef is almost swimming in the chile sauce. It can often be done with pork as well, but traditionally it is beef. This dish is considered comfort food and made traditionally in many Mexican homes in the Northern state of Chihuahua.

So what kind is used to make Chile Colorado? Well, it can vary and it depends on how you want to make the sauce and how spicy you want it to be. What makes the dish pop is the sauce itself. One common possibility is using a mixture of Guajillo chiles, Ancho chiles, and Arbol chile (for the love of spice!) or you can mix ancho chiles, pasillas, and guajillos. The chiles are then combined and boiled with onion and spices so that the flavor seeps out and ‘mingles.’

How is it served?

Well, Chile Colorado is one of those very versatile Mexican dishes. It’s kind of like refried beans, it is used as a side, as part of a burrito, as a filling, or as the entree. Chile Colorado has that kind of range. Most people serve it in a few ways including:

When it comes to the beef used in the recipe, you want the beef to be nice and tender and usually cut in strips or in small chunks.

The Competition: The Many Chile Varieties

Here in the Southwest United States, people do love their chile. Across the state line, New Mexico is a proud parent of hatch green chile. From Texas to Arizona, Colorado, and New Mexico, chile roasting stands are commonplace come Fall and late Summer. Roastings happen in backyards, in store parking lots, and on the side of the road where farmers park their trucks and get their cylindrical roasters out. It’s a familiar smell in the Southwest and there seems to be an ongoing competition between the green chile and the red.

The Hatch chile is a long fleshy green pepper grown in the valleys of New Mexico. In the state of Colorado, the pueblo chile is providing some competition. The Pueblo chile is also known by the name Mirasol and often used for Chile Colorado recipes in the U.S. The two states are now competing for a piece of the market.

You can’t use Hatch green chile, of course, to make traditional Chile Colorado. We’ll admit, they are both delicious but only one will have this traditional comfort food characteristic.

Get the Comfort and None of the Hassle

If you’re looking for the comfort food that brings back the warmth and taste of your mom’s kitchen, or your grandma’s kitchen, or the kitchen of a delicious Mexican restaurant, get the Chile Colorado sauce from Productos Real. It’s traditional, it’s delicious and more.

« A Deep Dive Into the World of Chicharrones and Its Possibilities
The Secret of the Street Taco and How To Make Them Drop Dead Good »
Hours
Monday - Friday: 9am-5pm Follow Us
Copyright © 2021 Productos Real
Privacy Policy